The Foundation of the Second Spanish Republic

The Second Republic was formed on April 14, 1931 after local elections returned anti-monarchist representatives in most cities and large towns. Although much of rural Spain elected pro-monarchist politicians, everyone, including King Alfonso XIII, knew that local caciques (local town bosses) controlled the vote. Realizing his perilous position King Alfonso XIII went quietly into exile leaving Spain a republic for the first time since 1874. Although the Second Republic was greeted with much popular enthusiasm, significant segments of society were wary of the new regime. On the right, many members of the army and the Catholic Church feared that the Republic would curtail their authority, by placing political power in civilian hands and introducing secular education. Supporters of both King Alfonso XIII and the rival Carlist claimant to the throne, Don Jaime (and after his death in October 1931, Don Alfonso Carlos) were fundamentally opposed to the concept of a Republic. Many rich landowners also opposed the Republic for fear of social changes it might try to implement. On the left the Republic received broad support, with the notable exceptions of the anarchos-yndicalist union, the Confederación Nacional del Trabajo (CNT) and the Federación Anarquista Ibérica (FAI). The Republic therefore emerged with hostile factions on both the right and the extreme left. Worse still, the supporters of the Republic were divided between middle class Republicans who wanted to create a more modern liberal capitalist regime, and Socialists of the Partido Socialista Obrero Español (PSOE), many of whose supporters expected radical changes, especially land redistribution, from the Republic. Under these circumstances a Constituent Cortes was elected in June and July 1931 for the purposes of creating a constitution for the new republic. Out of 470 seats, 361 went to parties that had supported the formation of the Republic, leaving those who disagreed with the new regime with little say as to the character it would take. 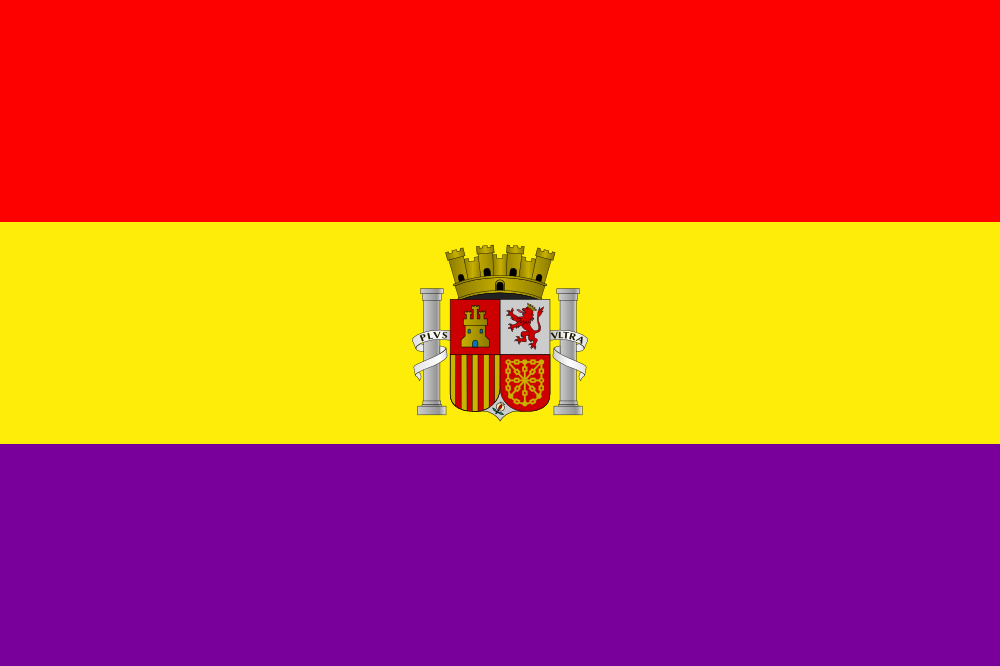 Flag of the Second Republic

The Constituent Cortes elected in June and July 1931 worked through December of that year to form a constitution. Although the Constitution was approved by 368 to 38 on December 9, there had been acrimonious debate over certain clauses, particularly Article 26, which dealt with the relationship between religious orders and the Spanish nation. Indeed Prime Minister Niceto Alcalá-Zamora resigned in protest at the adoption of Article 26 and was replaced by Manuel Azaña. In 1932 threats to the Republic emerged from both the left and right. Whilst 1931 had seen some serious strike activities, particularly by the CNT in Seville, January 1932 saw the beginning of the FAI policy commonly refered to as revolutionary gymnastics. This was the attempt to introduce libertarian communism in Spain by initiating all out local revolts against government, with the hope of inspiring a broader uprising. The first of these revolts occurred in the Llobregat valley on January 19, 1932 and was put down by the army by January 21. Reaction to the suppression of a similar uprising in January 1933 at Casas Viejas, where anarchist prisoners were shot in cold blood, was strong, causing the government to lose a vote of no-confidence and ensuring that no anarchists would be tempted to vote for them in the next election (many were believed to have voted for Republican parties in the Constituent Cortes elections). Meanwhile, in August 1932 General Sanjuro had attempted a right-wing coup in Seville, but failed after the workers responded with a general strike in the city. February 1933 saw the anti-Republican right organize itself in a voting bloc called the Confederación Española de Derechas Autónomas (CEDA). Elections in November 1933 would see would see the CEDA become the largest party in the Cortes. There were several factors leading to the victory of the right-wing parties in the 1933 elections. First, the electoral laws favored coalitions, awarding seats in the Cortes out of proportion to votes cast. Unlike 1931, the left went into the elections divided, essentially because the moderate Republicans and Socialists had different goals to the left-wing Socialists. This had led to disappointment among the Socialist rank-and-file and a determination on the part of Largo Caballero, one of the main Socialist leaders, that the PSOE would go it alone in the elections, so they would not be seen as collaborating with the Republicans. Secondly, the events at Casas Viejas meant that the anarchists effectively boycotted the elections. With the CNT being the largest working-class movement in Spain, this could only hurt the left's chances at the polls. Finally, the failure of General Sanjurjo coup attempt convinced many on the right that electoral victory was the only hope of having their views heard. The victory of the right heralded the start of what became known as the Bienio Negro (two black years), as the right reestablished itself in power.

Prime Ministers and Presidents of the Second Republic