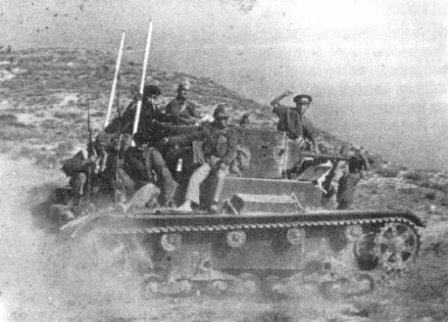 Pictured above is a Soviet manufactured T-26 tank with Republican troops riding on it. The T-26 was the best tank that saw service in the Spanish Civil War. Far superior to the German Panzer I and the Italian tankettes that also saw service in Spain on the Nationalist side, captured T-26's were highly valued by the Nationalists. Around 100 T-26's saw action in the Battle of Brunete, but the Republican tactic of using them for infantry support negated much of their potential value.

Maps of the Battlefields

A selection of maps showing some of the battlefields are available in the dropdown menu. All maps created by PACO.

These maps are licensed under a Creative Commons Attribution-Share Alike 3.0 Unported License.

The Battle of Brunete

The battle of Brunete was the focal point of the largest offensive in the Spanish Civil War so far. Launched by the Republic on July 6th 1937, the offensive was proceeded by both aerial and artillery bombardment of the thinly held Nationalist lines west of Madrid. This was to be the first major offensive undertaken by the Popular Army that was taking over from the previously existing militia system.

The Republican plan, devised by General Vicente Rojo, was to envelop the Nationalist army that was besieging Madrid and destroy it piecemeal. Another important goal of the plan was to delay the feared Nationalist advance on Santander in the North, by forcing the Nationalists to divert troops to aid the Madrid front.

The Republic had two army corps for the offensive, the 5th and the 18th, as well as tanks and artillery, in all around 80-90,000 men, over 100 T-26 tanks and support from 200 aircraft. The terrain was favorable for infantry and tanks, although the weather would be around 100 degrees, which would cause significant heat related problems for the combatants. The Nationalists initially had only around 2,000 men in the area the Republic planned to attack, although these were reinforced by an additional 700 Moorish troops from the Army of Africa shortly before the offensive when the Nationalists were made aware by deserters that an offensive was being planned.

The initial attack was met with surprising resistance, defenders outnumbered by about ten-to-one halted assaults on Villanueva de la Cañada. It was finally taken after the commitment of additional forces by the Republic, but the defenders had managed to hold for fifteen hours. Brunete itself was captured on the first day by Lister's 5th Corps, which established defensive positions around the town. The planned east-wing of the enveloping attack, from Carabanchel in Madrid, never broke the enemy line, despite heavy artillery bombardments. This meant that the initial attack plan of the Republic could no longer be carried out. Instead the territory captured around Brunete would be defended.

Franco's reaction was rapid. He immediately began dispatching additional troops to the Brunete front and ordered all Spanish and Italian air squadrons to carry out operations against the Republicans at Brunete. The small glimmer of light for the Republic was that the offensive against Santander was indeed postponed. Meanwhile the Republicans attempted to gain additional territory around Brunete, but by July 14th they had to go over fully to the defensive. The area captured was about 8 miles by 10 miles. The Nationalists launched the troops they had moved to the front onto the offensive to retake the lost territory. Ferocious fighting followed, with the Republicans desperately trying to hold onto their gains. By July 25th however, Brunete had been retaken and some Republican units had routed, to be stopped only by executions or the threat of being shot by their own side. The offensive had been costly for the Republic, with losses of approximately 23,000 men and massive amounts of equipment. The Nationalists are estimated to have lost around 17,000 men, but they remained organizationally intact, which was not the case for all Republican units. The Republic managed to hold onto a 4 mile by 10 mile area of captured territory, but the Nationalists would be able to quickly launch their offensive against Santander.